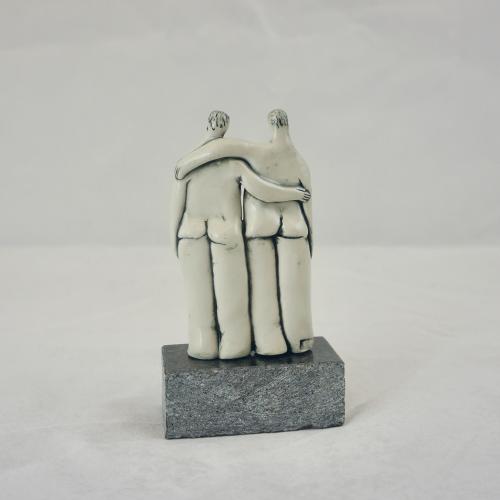 South African artist Tania Babb was born in Zimbabwe in 1967 and currently lives and works in Cape Town, South Africa. She graduated in Graphic Design from Ruth Prowse School of Art, Cape Town, South Africa in 1985 and subsequently worked as a sculptural apprentice. She also completed the Ceramic and Life Drawing course at the Surrey Institute, UK in 1988. Selected exhibitions include, ‘Art de Vivre’, Franschoek, South Africa (2001), Standard Bank Festival of Arts, Grahamstown, South Africa (1995) (1997), four-person show ‘Cross Culture Sculpture’, Primart Gallery, Cape Town, with Evette Weyers, John Casozi Matovu, Hercules Viljoen and Faith Loy Plaut (1993) and ‘Women by Women’, The Art Scene, Cape Town, South Africa (1987). In 2011 Tania was invited to be the guest artist at the ‘Natal Regional Exhibition’, South African Potters Association and invited in 2010 by the Namibian Potters Association to give ceramic sculpture workshops in Namibia as well as by the KZN Potters Association in Durban to give a ceramic workshop. Tania continues to teach ceramics at the Tania Babb Ceramics School, Cape Town, South Africa. ‘I feel I have to say something about being an artist in Africa. Only when one leaves this continent for a while and then comes back does one recognise a subtle but pervasive energy, for want of a better word, that seems to emanate from the surface of this continent. Permeating its flora, its fauna and its people. This vitality may very well be a subjective experience but I do see evidence of this in the creativity, particularly ceramics. The colours, the vibrancy, the fresh and new surfaces, the immediacy, to me are all evidence of a rawness that I feel is unfettered and untempered by hundreds of years of civilisation. There is also fertility derived from a cross pollination of cultures which I feel makes South African ceramics unique and globally exciting.’ – Tania Babb