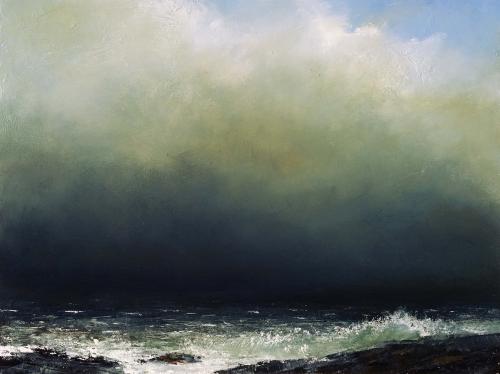 'The presence and absence of light is the most fundamental concept behind all my paintings. Although often diffused or obscured, it permeates even the heaviest of skies, giving hope and acting as an uplifting counterpoint to dark, mysterious seas. Feelings of insignificance and isolation are instilled by the vast depth and scale of these two elements.'

Born in 1972, many of Mark's most vivid childhood memories were formed during his annual visits to the Cornish coast. He studied painting at Norwich School of Art and Design, graduating in 1997 with a Fine Art B.A.(Hons.) degree. Mark’s painting has been influenced through travel and having lived for three years amongst the dramatic landscapes of the Limousin region of France. Mark lives and works in St Ives, drawing on the inspiration offered there by the dramatic local seascapes and landscapes of the Cornish coast. His exploration of the relationship between light and dark are key to creating drama in his paintings, whilst his depictions of large skies have led to him also being described as a 'cloudscape' artist. He works in oil (with his smaller pieces on board and larger works on canvas), building multiple layers of paint and glaze, giving the illusion of depth to both sea and sky. Artists Statement: 'Although it is normally best described by the apparent meeting of sea and sky at the horizon line, it is often indistinct or entirely lost, and while our logical mind attempts to find it, we are drawn into and through the scene. The compositional components of light, water, land and sky lend themselves naturally to abstraction, which spontaneous and rapid marks help to capture; deciding which of these should remain is an integral and constant part of the process. Seascapes usually change quickly; shifting clouds cause differing reflections and refractions of light, immediately transforming a myriad shades and colours. These changes induce a constantly evolving emotional response to the subject, allowing it to be explored again and again. The application and removal of many layers of paint provides depth, until a balanced and coherent image emerges.'