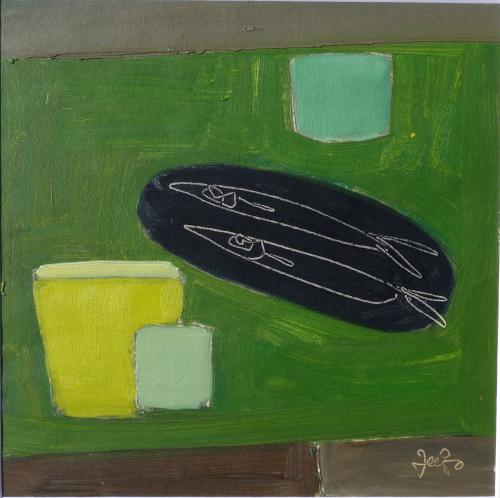 “As always, it's about colour, there is a gentle retro aspect to this work.”

Fiona MacRae (born in Argyll, 1965). She studied painting at Glasgow School of Art and after graduating in 2000 has pursued a full-time career in painting. She has exhibited nationally and internationally, in groups and solo on three occasions. MacRae is a self-proclaimed beachcomber; lover of colour, textiles, pots and the Atlantic fringe. Her tabletop still-lifes are “heavily influenced by flat winter island landscapes, both in colour and composition; the wonderful greys of the sea, sky, wet sand, the raw brown bare earth, with the occasional splash of lichen green”. “I aim to create across the surface of the paper a dialogue using flat planes of colour,space, layering, exposing, mark making and scratching into. The pottery pots, kitchen utensils textiles and fish are vehicles on which to hang yet more colours.” Currently she works from her studio in Taynuilt, Scotland. 1993-2000 - Glasgow School of Art 1998 - Ecole des Beaux Arts, Paris 2008 - Won the Aspect Prize, Paisley