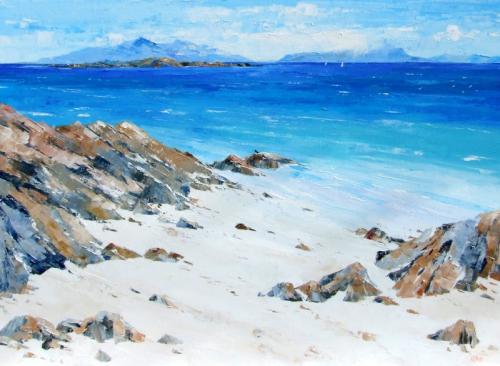 Erni is a Scottish born artist, born in Ayrshire in 1936. He has been painting since childhood. Erni was schooled at Ayr Grammar & Ayr Academy and much of his youth was spent with the fisherfolk of West Scotland and their boats & he still cruises these waters each year. He trained for three years at Glasgow School of Art, where he studied under Donaldson, Mathieson & Robertson. His work reflects their influences & those of the Scottish colourists who like him, have been inspired by the wonderful light & colours of the unspoiled west coast and islands of Scotland. Painting in this tradition, he works with oils on canvas, using brush & knife. In 1985, after many years in banking, he returned to Art & Design when he established an interior design company in Shrewsbury, Shropshire. He continued to work in oils, mainly commissions for corporate & private clients, but it was not until 1999, when the company was sold, that more time became available for painting. His work is successfully shown in many galleries in England, Scotland & abroad and he was elected a Fellow of the Royal Society for Arts, London, in November 2004.